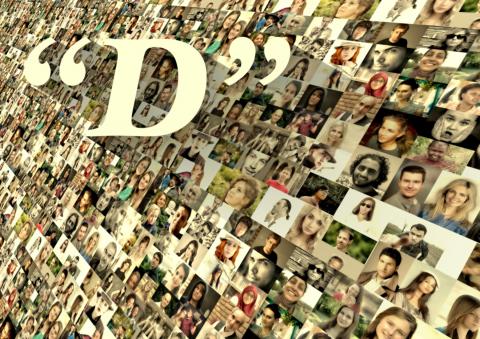 The most important attribute of the special program CEPID [1] (Centros de Pesquisa, Inovação e Difusão, or RIDC, Research, Innovation, and Dissemination Centers) is the multiplicity of its missions. Thus, in addition to the primary mission of developing research on specific themes, CEPID´s are characterized by the development of effective mechanisms of Technology Transfer and Education and Knowledge Diffusion. In this article, we focus on the mission of Education and Diffusion of Knowledge of Redoxoma [2], translated by D from CEPID. A careful reading of Fapesp's 2011 initial public announcement [3] reveals that what is expected in D encompasses quite diverse actions such as:

[...] centers must maintain diffusion activities and contribute to the improvement of science education; [...] they should contribute to the scientific education of children and young people, in the activity of scientific diffusion, be it interacting with schools or interacting directly with the general public; [...] in addition to performing extension activities in the area of basic education, such as scientific initiation for students and teachers of high school, teacher training and courses of scientific diffusion.

Difficult to translate all this into a simple D. In fact, what is intended are educational actions, both in the contact with students of basic education and with the general public, promotion of professional development of teachers in addition to actions to raise public understanding of science. Apart from the question of covering several actions in D, it is worth taking advantage of this space to address the issues of ambiguities that usually appear with the terms Diffusion / Dissemination. And in the sequence we will deal with the D actions of Redoxoma. Difusão incorporates Divulgação científica, Disseminação científica and Jornalismo científico itself

The D in the English version of the Fapesp website [1] is treated as Dissemination and in the Portuguese version it is translated as Difusão (Diffusion). Beyond the different words for the English terms - diffusion, dissemination, public awareness of Science (PAwS), public understanding of science (PUS), or more recently, Public Engagement with Science and Technology (PEST), among others, there are also ambiguities of the terms in the Portuguese language - the terms Difusão, Disseminação and Divulgação are often used as synonyms. So it is worth treating these differences of the terms in Portuguese, although this text is written in English. In an attempt to make it clearer we will use the Portuguese terms in italics to avoid generating more misunderstandings.

According to Bueno [4] Difusão is the broader term and refers to any and all processes or resources used for communicating scientific information. Thus, Difusão incorporates Divulgação científica, Disseminação científica and Jornalismo científico itself (Figure 1). What changes is the target audience and therefore the level of language used. If the Difusão is made for experts, it is called Disseminação científica and occurs with specific technical terms of a given area (for example it is what occurs in conferences and scientific articles), if it is made for the general public it is called Divulgação científica (communicating science to public understanding). The latter presupposes a recoding of the specialized language of the experts into a language comprehensible to a non-specialist audience [5], for instance, videos, texts, explanatory health campaigns, textbooks, documentaries, etc. Also, there is the term Jornalismo científico (Science journalism) that is used when the article dealing with science is written by a journalist. 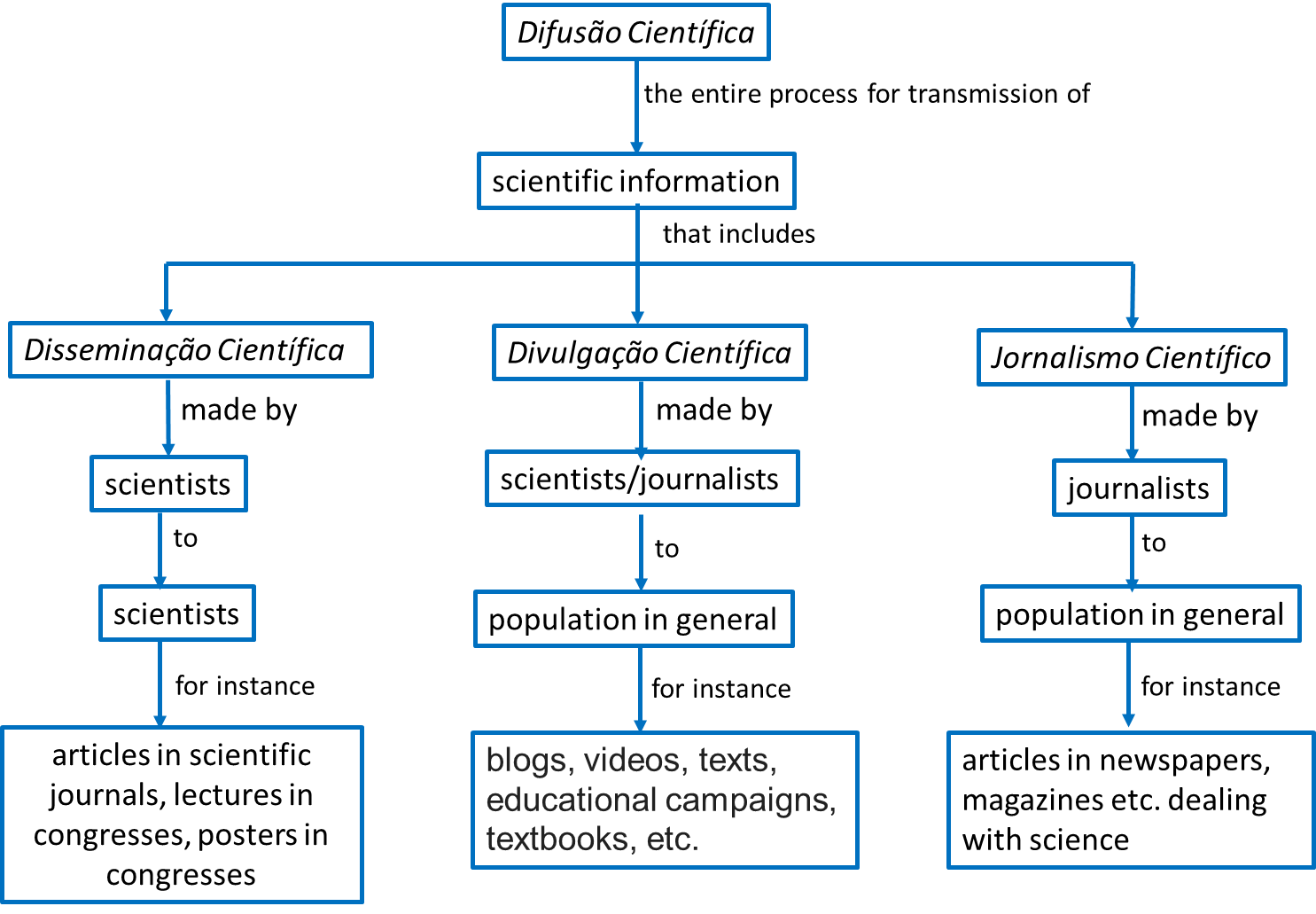 Thus, in D of CEPID several activities are being included as the Disseminação científica (represented by the articles and lectures of scientists for public experts and also, this newsletter [6] that is another channel for the dissemination of Redoxoma researches), Divulgação científica (to students and non-specialized audiences), and Jornalismo científico (from articles produced for the Redoxoma website) as well as several other actions related to basic education and teacher training activities. And in this range of activities under the letter D from our CEPID Redoxoma, are also included activities of educational research that feedback our Divulgação actions.

Now we will focus specifically on the D actions of Redoxoma. It is noteworthy that the research of CEPID Redoxoma focuses on the redox mechanisms involved in cellular homeostasis and pathologies, with emphasis on chronic-degenerative diseases, such as cardiovascular, metabolic and inflammatory diseases. Thinking about the Difusão actions students have problems in associating the concept of oxireduction reactions with the context of the day to day and the contact with the basic education and the training of teachers, the chemical content that connects all of this is oxidation reactions or more generally speaking, redox processes.

Speaking briefly of the difficulties with this subject, students have problems in associating the concept of oxireduction reactions with the context of the day to day, in spite of the importance of the redox processes and their daily applications. On the other hand, some teachers find the subject difficult to teach, and because of this, they feel that lesson plans are difficult to prepare. In chemistry teaching in general and in teaching redox processes in particular, students have many difficulties in traffic that scientists easily make between the macroscopic (the phenomenon), submicroscopic (particles and their arrangement) and symbolic levels (formulas, chemical equations, signal charges, etc.), see figure 2. In addition, there are problems with the coexistence of several explanatory models, with the understanding of the simultaneity of oxidation and reduction reactions, with a confusion between the language used in physics for electrical circuits and that of chemistry when dealing with cells and batteries, among many others.

Figure 2. Johnstone's model of the three levels of Chemical Knowledge [7].

Our group has developed several analyzes with the teaching of redox processes and brought this knowledge to Divulgação actions, production of didactic resources, courses for teachers and content for the media. Some of the group actions will be mentioned here. We analyzed the difficulties with the school redox content in the Brazilian context and analyzed textbooks approved by the federal government and used in all basic education (from the first to the ninth year of elementary school and in the three years of high school). Subjects such as cellular respiration, photosynthesis, cells and batteries, rust and combustion already appear in the first years of the elementary school in a more contextualized and phenomenological way and are increasingly being formalized and translated into a submicroscopic and symbolic level in High School. The visual representations in the books were a specific theme of analysis and what is observed is an excessive valuation in the books of representations at the macro level (mainly pictures) and in much smaller quantity appear the representations at the submicroscopic and symbolic level (Figure 3). And still in smaller numbers appear representations in which the three different levels of the chemistry are contemplated. There are no explanations on how to move between these different levels and this is a task that is left to the teacher. It turns out that we have also analyzed teacher's classes in this aspect and what we observe is that the teacher transits between these levels as if it were obvious to his students. In the textbooks are perceived representations and texts that end up emphasizing still more the difficulties of the students. The group has also produced didactic resources that take into account the difficulties pointed out. Thus, simulators, videos, and games were produced and made available on the Labiq [8] website. The group also developed and offered several courses for teachers that showed this repertoire of difficulties, textbooks, and student resources.

In terms of Divulgação, Redoxoma has regularly participated in lecture programs in public places intended for general audiences. Examples are: Pint of Science [9] (presentations of scientists in bars), Chemistry is life (lectures by scientists at the Mário de Andrade Library [10]), Chemistry Week [11] at IQ-USP, 24 hours of Science [12], USP Science and Technology Week [13], National Science and Technology Week [14], among others. An exhibition was produced for the São Paulo subway on Aging and was developed a site named Free and Radicals [2,15] with explanatory material. Content was also produced for the media (Jornalismo científico) where research activities related to technology transfer and education and Divulgação científica are made available to the public through articles published on the Redoxoma´s website [2], shared on the Facebook page [16] and distributed as a press release for Fapesp Agency [17] and the Journal of USP [18]. This material generated new reports and videos, expanding the Divulgação of Redoxoma.

In terms of training of people for the Chemical Education area, six masters dissertations and nine doctoral theses were defended in the group since the project start (2012) and three master's degrees and nine doctorates are in progress. Lists of these surveys and publications are presented on the Redoxoma website in the annual report tab [19], Labiq [8] and PEQuim (Pesquisa em Ensino de Química, Research in Chemistry Teaching) group’s page [20].